Three Poems from Montreal Before Spring by Robert Melançon

One of the books we're most excited to be publishing this coming spring is Montreal Before Spring, a book of poems by Quebec francophone poet Robert Melançon translated by Donald McGrath. Melançon's verse is painterly, metaphysical, restrained and elegiac, qualities captured wonderfully in McGrath's translation. In fact, a poem from the forthcoming collection, "Elegy Written in Notre-Dame-de-Grâce Park," just recently won The Malahat Review's first-ever Francophone Poetry Translation Contest. Judge Donald Winkler had this to say:

Donald McGrath has admirably rendered the cadence and tone of Robert Melançon’s limpid elegy. The poem’s muted music with its judicious internal rhyme links the poem not only with its French original, but with a venerable English tradition of elegiac verse.

The Fall 2014 issue of The Malahat Review (issue 188) is unique among Canadian periodicals in that it is exclusively devoted to literature in translation, both from Canada and abroad. In addition to running a thoughtful review of Dance With Snakes by Horacio Castellanos Moya (a violent, absurdist romp we like to say "reads as if  William T. Vollmann wrote a script for a film version of Grand Theft Auto directed by Quentin Tarantino)  they also ran an appreciative review of Robert Melançon's previous collection For As Far As The Eye Can See, which reviewer Marie Vautier calls "original and allusive" and which offers "a new view on ordinary sights in an unnamed city which can be recognized as Montreal."

In an online interview for The Malahat with stephen e. leckie, McGrath talks about what drew him to the award-winning poem:

I liked the poem’s evocation of dark winter evenings in the city and the emotional darkness in it as well. When the speaker dismisses the dire conclusions he has come to as "hackneyed tropes," it is not to replace them with something more uplifting. He seems rather to have reached such a degree of disillusionment that the only thing left to do is something prosaic, "sensible," namely, return home so as not to catch cold. It’s a dispiriting perception but an emotionally honest one.

McGrath goes on to say that he chose to translate the book "because of its intimiste depictions of personal life and Montreal in their many respective and overlapping moods."

So without further ado, here are three poems from Montreal Before Spring, forthcoming in March 2015.

I sense, close by and all around, the city
fused wholly with this darkness, 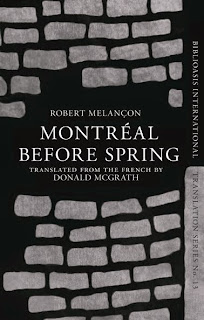 in this mass full of unknown things
called night. The bed is an island
or a boat. At the open window
a light breeze stirs, the wind flows
into the bedroom, outside it flows
through the leaves like a dry river.
You sleep, abandoned to the July heat
that the night does nothing to relieve;
your breath blends with the murmurs
of a gloom composed, it seems,
of swells of silence, indistinct noises,
whispers that lurk nearby. Far away,
the sound of a car engine builds
and fades. A call is heard,
draws near and flees, returns
and is lost in the air it sculpts.
It’s the cry of the nighthawk
hunting above the low buildings. Sleep
rolls you into that Styx
called night. I watch you,
I envy you your peace. I adopt
the recumbent pose of a tomb effigy.
Soon, when I too will be asleep,

Evening approaches under a drawn
sky like a bed canopy.
I linger at day’s end to watch
the world dissolve in rain.

All I hear is its obstinate pitter-patter.
It’s as if the gods were lurking, famished,
nearby, as if they’d come to stuff
everything into their nothing bags.

At my feet, a patch of grass glistens.
You’d think it alone had escaped
all that commotion. I pluck a few blades
as a viaticum, I inhale their chill perfume.

A VOICE HEARD IN A DREAM, UPON AWAKENING

“Your days will pass, one by one,
words in a breathless sentence strung
together without punctuation, your actions,
those thoughts that come at such a cost,
won’t follow you, but if they do
it will be as perpetually vain regrets, little
will it matter, very little, whether you
betray or remain faithful, because each will
come to you in turn, everything will
be lost as if you’d been dreaming, it’s like
a dream, the disorder of an old man’s life
that comes back at the end, you’ll descend
into lower depths you don’t suspect are there,
you’ll be seized, at times, by an unfathomable joy
before the expanse that evening will open up
where the streets run out; impassive, the world
will continue on its course, flowers
that will fade in autumn will come, snow
that’ll melt like snow in the sun, each day
will bring with it the History you’ll throw out
with the newspaper, with your boredom, you’ll
have friendships that you’ll lose, love you’ll see
falling away from you, that you’ll try
in vain to hold onto, everything will be
given to you, everything taken away,
everything will come, everything pass away
like this night I’ve pulled you from, now go.”

Robert Melançon is one of Quebec’s most original poets. He won the Governor General’s Award for Poetry for his collection Blind Painting and shared the Governor General’s Award for Translation with Charlotte Melançon for their French version of A.M. Klein’s The Second Scroll. A long-time translator of Canadian poet Earle Birney, Melançon has been the poetry columnist for the Montreal newspaper Le Devoir and the Radio-Canada program En Toutes Lettres. In 2013 Biblioasis published his collection For as Far as the Eye Can See in English. He lives in North Hatley, in Quebec’s Eastern Townships.

Donald McGrath has published two poetry collections, most recently The Port Inventory (Cormorant Books, 2012). His poem “Biarritz” was selected for the Web anthology of the 2012 Montreal International Poetry Prize. He was awarded the 2014 Malahat Review Poetry Translation Prize for his translation of Robert Melançon’s “Elegy Written in Notre-Dame-de-Grâce Park.”He lives in Montreal.